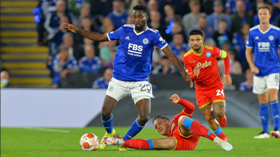 Leicester City manager Brendan Rodgers is of the opinion that the red card shown to Wilfred Ndidi in the closing minutes of his side's 2-2 draw with Napoli on Thursday night was excessive.
Portuguese referee Tiago Martins produced a red card in the 93rd minute after the Super Eagles star picked up his second caution for pulling the shirt of Ounas near the half-way line.
Around the midway point of the first half, the holding midfielder was booked for a challenge on Zambo Anguissa.
Rodgers questioned the referee's decision to send Ndidi off and insisted that the yellows were harsh.
In quotes relayed by LeicestershireLive, Rodgers told reporters post-match : "I didn't think the referee was very good.
"He was unfortunate and has done really well to get through the game to get to that point after the early yellow. He’s just trying to stop the attacker.
"It was a little bit harsh, I didn't think the first one was a yellow. I didn’t think the referee was great."
Ndidi is set to miss Leicester City's trip to Legia Warsaw on matchday two of the Europa League.
Ifeanyi Emmanuel
Photo Credit : lcfc.com