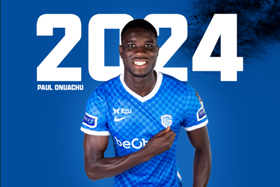 Through a statement on their official website, Belgian First Division A side Racing Genk have announced that Paul Onuachu has signed a new deal.
The Nigeria international has agreed a one-year contract extension and he's now tied to the Limburg club until the summer of 2024.
Onuachu has been rewarded with a new lucrative deal less than a week after scoring his 50th goal for Racing Genk, against Rapid Vienna in the opening round of matches in the UEFA Europa League.
The 27-year-old made it 51 goals in 79 appearances after coming off the bench to net another winner in a league match against Sint-Truidense VV at the weekend.
He has been a success since joining Racing Genk from FC Midtjylland in August 2019 for a fee of six million euros.
Last season, Onuachu mustered 33 goals in the Belgian First Division A, a feat that earned him the Golden Boot and the Professional Footballer of the Year awards.
A product of FC Ebedei, Onuachu was a member of the Super Eagles squad to the 2019 Africa Cup of Nations and has fifteen international caps to his name, scoring three goals.
Ifeanyi Emmanuel
Copyright ANS