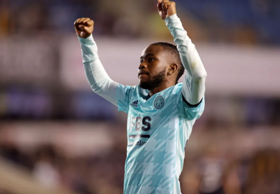 Allnigeriasoccer.com's round-up of the Nigeria-eligible players in action for their respective clubs in the third round of the Carabao Cup on Wednesday evening.
At the Den in London, Leicester City earned a 2-0 win over Millwall thanks to second half goals from Ademola Lookman and Kelechi Iheanacho.

The RB Leipzig loanee was making his full debut for the Foxes and was joined in the starting line-up by Super Eagles duo Kelechi Iheanacho and Wilfred Ndidi.


Iheanacho was involved in the build-up to the opening goal of the game as his effort was deflected into the path of Lookman, who finished into an empty net in the 50th minute.
Two minutes from time, the Foxes number 14 belted the ball into the roof of the net to make it 2-0.
The Super Eagles hopeful subbed out at minute 69 while Iheanacho and Ndidi put in a full shift.

At the Emirates Stadium London, goals from Lacazette, Smith-Rowe and Nketiah earned Arsenal a 3-0 win over League One side AFC Wimbledon, for whom Watford loanee Dapo Mebude was in action for the last 30 minutes.


Folarin Balogun entered the fray to replace Nketiah with seven minutes left on the clock.
At Stamford Bridge, Chelsea advanced to the next round of the competition after winning 4-3 on penalties against Aston Villa.
It finished 1-1 after ninety minutes as Cameron Archer cancelled out Timo Werner's opener to take the game to penalties.
Three minutes before half-time, teenage midfielder Carney Chukwuemeka came off the bench to replace the injured Morgan Sanson, his elder brother Caleb Chukwuemeka was an unused substitute.
Ifeanyi Emmanuel
Photo Credit : lcfc.com
Copyright ANS