...the complete Nigerian football portal
Subscribe
Iheanacho on his goal vs Millwall, why he didn't pass to Daka, part played in Lookman's strike
Published: September 22, 2021 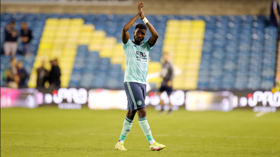 Kelechi Iheanacho was on media duties shortly after Leicester City registered a 2-0 road win over Millwall at the Den to progress to the fourth round of the Carabao Cup.
Ademola Lookman, making his full debut for the Foxes, had the simplest of tasks to slot home the rebound after Iheanacho's shot was parried and broke the deadlock five minutes into the second half.
Few minutes after fluffing a chance, the Super Eagles striker put the game to bed when he blasted the ball from the edge of the area to double the advantage in the 88th minute.
On his brilliant strike, Iheanacho told LCFC TV post-match : "It's a sweet goal, it's a rocket, we're happy with that but it was a team work and we're happy going into the next round.

"We put the work in today, we defended really well the last ten minutes and we got the first goal early in the second half then got the second goal.

"I am happy with the goal and I'm looking forward to the next round".
Iheanacho went on to explain that he went for goal instead of passing the ball to Patson Daka because he did not see the Zambia international.
"I didn't see him really. If I saw him I would have passed it to him but I think he'll be happy with the goal. If I miss that one I think he will be fuming. I think next time I'll pass to Patson".
The 2013 U17 World Cup Golden Ball winner played a big part in Ademola Lookman's first goal in Leicester City's colours , the former England youth international slotted the ball into an empty net after Iheanacho's shot was parried by the Millwall goalie.
"It was a good counter attack from the team, took the ball well and tried to put the ball in the bottom corner but the keeper parried it for Ade and it was a difficult finish, difficult technique but he guided it in so it's a good finish,"added Iheanacho.

Leicester City have been drawn against Brighton & Hove in the fourth round of the Carabao Cup and the match will be played at the King Power Stadium in the week commencing October 25.
Ifeanyi Emmanuel
Photo Credit : lcfc.com