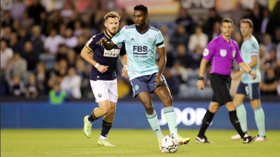 Leicester City are through to the fourth round of the Carabao Cup after seeing off Millwall at the Den on Wednesday night, with their three Nigerian stars playing key roles in the victory.
Four minutes into the second half, Iheanacho got his shot away but The Lions goalkeeper spilled it and Lookman was there to tap in the rebound.
On 88 minutes, the Super Eagles striker made sure victory was not in doubt when he doubled the advantage for Brendan Rodgers' side, rocketing a shot in off the crossbar after he was released by Wilfred Ndidi.
Leicester City assistant manager Chris Davies has praised Ndidi for setting up the counter-attack that led to Iheanacho scoring.
Reflecting on the second goal, Davies told Leicester City's official website : "It was good power from him and I think the power is what beat the 'keeper in the end because he didn't actually dive.
"That was a longer counter-attack, a good ball from Wilfred Ndidi, a great run, and Patson Daka makes a good supporting run, which leaves one vs. one.

"He managed to get inside on his left foot and he's got a lot of quality from that position".
Leicester City have been drawn against Brighton & Hove in the fourth round of the Carabao Cup and the match will be played at the King Power Stadium in the week commencing October 25.
Ifeanyi Emmanuel
Photo Credit : lcfc.com