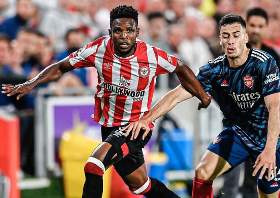 Jay Harris, Brentford reporter for the Athletic, has admitted that he's impressed with Brentford's project in their debut season in the English Premier League.
The Bees bolstered their ranks with the signings of Kristoffer Ajer from Celtic, Frank Onyeka from sister club FC Midtjylland, Yoane Wissa from Lorient, álvaro Fernández from SD Huesca and free agent Zanka.
Brentford, under manager Thomas Frank, have not looked out of place in their maiden Premier League campaign, losing once in five games and caused a sensation by beating Arsenal on the opening night of the season.
Harris underlined that Onyeka could have chosen to join other top European clubs after starring in last season's Champions League but opted for Brentford.
Speaking on Premier League Productions on Thursday,  he said : "They nearly got promoted the year before so they've clearly got very talented players in their squad and that's before you come on to some of their new signings.

"I have been really impressed by Kristoffer Ajer since he came in from Celtic, I hadn't seen much of him before but he just looks so composed.

"Frank Onyeka who has come from FC Midtjylland, he was playing against Liverpool in the Champions League last season.

"He is 23 years old, he has chosen to join Brentford, I think that speaks volumes about their project so the whole squad I've been impressed with."
Onyeka has played six games in all competitions for Brentford so far this season after his €10million move from Midtjylland.
Ifeanyi Emmanuel
Photo Credit : brentfordfc.com
Copyright ANS