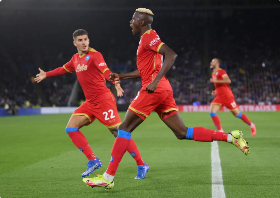 With the departure of Cristiano Ronaldo and Romelu Lukaku to Manchester United and Chelsea respectively in the summer transfer window, Victor Osimhen may well be one of the favorites to win the Paolo Rossi Award in the 2021-2022 season.
The Nigeria international continued his rich vein of form by netting a brace as Napoli thrashed Sampdoria 4-0 at Stadio Comunale Luigi Ferraris in Genova on Thursday evening.
In doing so,  he scored for the third game running in all competitions  and could equal his personal record of netting in four consecutive matches for Napoli if he finds the net this coming weekend against Cagliari.
Osimhen opened the scoring when he slid in at the back post to covert a cross from Insigne in the tenth minute before he had a lovely lob ruled out for offside.
The Napoli number 9 slotted home from eight yards out to make it 3-0 five minutes after the restart.
Desperate to get a hat-trick, Osimhen had a big opportunity to go home with the match ball but the angle was too tight for him to curl the ball into the far corner in the 64th minute.
The 2015 U17 World Cup winner also bagged a brace in a 2-2 draw versus Leicester City in the Europa League exactly a week ago, before opening his account in the Serie A in a 4-0 rout of Udinese three days ago.
Igho Kingsley
Photo Credit : uefa.com
Copyright ANS