...the complete Nigerian football portal
Subscribe
'They are not scared of any team' - Brentford hero Sodje warns Liverpool stars ahead of EPL clash
Published: September 24, 2021 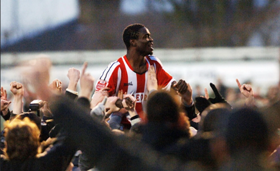 Brentford hero Sam Sodje has insisted that The Bees will not be scared of facing Liverpool in Saturday's Premier League meeting at Brentford Community Stadium.
After seeing off one of the top six clubs in Arsenal on the opening round of the season, Jurgen Klopp's side awaits manager Thomas Frank and his charges.

Liverpool have in their ranks some of the top stars in the Premier League including African duo Mohamed Salah and Sadio Mane, which could strike fear into many teams.
By conceding only two goals from their opening five matches,  Brentford have shown that they are solid defensively.
"I am so happy, so delighted talking about Brentford in the same sentence with Liverpool, it's a dream come true," Sodje said to allnigeriasoccer.com.

"Every player in Liverpool is a world class player with the superstars like Salah and Mane.

"The whole players are dangerous, from the right-back to the left-back. I know with the mentality of Brentford now, they are not scared of any team.

"Brentford will face Liverpool and do their best, hopefully they can get a result."
Sodje had kind words for Brentford midfielder Frank Onyeka, saying that the Super Eagles star has conducted himself well on and off the pitch since his arrival from FC Midtjylland in July 2021.
"I know people at Brentford and they have been telling me about Frank Onyeka, how good he is and off the pitch his attitude and discipline.
"They are very happy with him. I am looking forward to going to his game soon and I will definitely see him," the Special Assistant on Sports to the Delta State Governor added.
Onyeka has been involved in every single game played by Brentford in the Premier League with the exception of the 1-1 draw against Aston Villa.
Ifeanyi Emmanuel
Photo Credit : brentfordfc.com