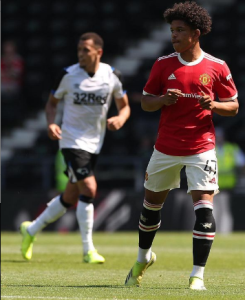 Shola Shoretire was impressive as Manchester United secured their second successive Premier League 2 win by beating Everton 1-0 at Haig Avenue (Southport, Merseyside) on Friday night.
The England youth international of Nigerian descent was named in the staring line-up along with Dutch-Nigerian winger Dillon Hoogewerf, who was in action for 69 minutes.
Shoretire provided the opportunity from which Anthony Elanga netted the game-winning goal in the third minute.
He picked the ball up in the box that got played through to him by Hoogewerf, threw a dummy which was bought, before rolling it to Elanga, who finished from close range.
Though there was plenty of time for the Toffees, manager David Unsworth's side couldn't find an equaliser.
Shoretire is highly thought of at Manchester United, with Ole Gunnar Solskjær fielding him in three first team matches in the second half of last season.
The current United Young Player of the Year has directly participated in five goals (2 goals, 3 assists) in nine appearances for the Red Devils youth teams so far this season.
Ifeanyi Emmanuel