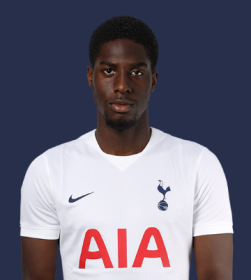 Tottenham Hotspur first team manager Nuno Espirito Santo invited Tobi Omole to train with the first team ahead of the north London derby against Arsenal, allnigeriasoccer.com reports.
Nuno Espirito Santo ran the rule over Omole during yesterday's workout at Tottenham Hotspur Training Centre in Enfield.
The Anglo-Nigerian defender is familiar with a host of Arsenal first team stars having spent six years at the Gunners academy, where he played with the likes of Bukayo Saka, Arthur Okonkwo and Folarin Balogun.
Omole spent a large part of pre-season with Tottenham's first team and was listed on the Premier League roster after catching the eye in friendly matches against Colchester United, Leyton Orient and Milton Keynes Dons.
Aged 21, he is highly thought of by Nuno Espirito Santo, with the Portuguese football tactician naming him as a reserve option for recent matches against Crystal Palace and Rennes.
A versatile player, the left-footed Omole  is more of a center back than a left-back and defensive midfielder.
So far this season, he has played five times for Tottenham Hotspur's development squad, scoring one goal.
Ifeanyi Emmanuel
Photo Credit : tottenhamhotspur.com