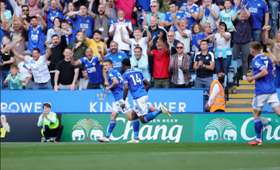 A round-up of Nigerian players that were in action for their respective clubs in the English Premier League on Saturday, September 25, 2021.
At Old Trafford, Shola Shoretire, who was on U23 duties last night, was not selected in the gameday squad as Manchester United suffered a shock 1-0 loss to Aston Villa, for whom 17-year-old midfielder Carney Chukwuemeka was a non-playing substitute.
After Aston Villa's Kortney Hause headed in the winner in the 88th minute, United had a golden chance to share the spoils in injury time, only for Bruno Fernandes to miss a penalty.
At Goodison Park, Everton returned to winning ways by beating Norwich City 2-0 thanks to Andros Townsend and Doucoure's goals.
Alex Iwobi had the first effort on goal of the second half but dragged his shot well wide from 25 yards.
The former Arsenal winger was replaced with one minute left on the clock.
At Vicarage Road, Ismaïla Sarr's second half strike cancelled out Sean Longstaff's opener to salvage a draw for the Hornets against Newcastle United.
William Troost-Ekong and Emmanuel Dennis started for the home team and were booked in the 40th and 17th minute respectively.
Oghenekaro Etebo came off the bench to replace Dennis with fifteen minutes left on the clock.
Leicester City and Burnley drew 2-2 at the King Power Stadium, with three Nigerian stars on parade for the home team.
While Ademola Lookman and Wilfred Ndidi were handed starts, Kelechi Iheanacho entered the game as a substitute in the 62nd minute.
Jamie Vardy's own goal put the visitors ahead, before the Leicester City number 9 leveled things up.

Maxwell Cornet restored the Clarets advantage with a well-taken volley in the 40th minute and Vardy drew Leicester level again five minutes from time.
Vardy finished from a tight angle to make it 2-2 after Iheanacho slid a delicious through ball.
In the late kickoff, Frank Onyeka starts for Brentford against Liverpool at the Brentford Community Stadium.
Ifeanyi Emmanuel
Photo Credit : lcfc.com
Copyright ANS