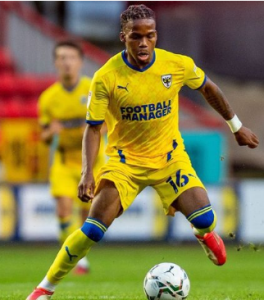 Six Nigeria-eligible players were on target for their respective clubs in Football League matches that took place on Saturday, September 25.
Bournemouth have returned to top spot in the Championship after beating Luton Town 2-1 at the Vitality Stadium.
The Cherries were two goals up after half an hour as Philip Billing volleyed home to double the advantage after Chelsea academy product Dominic Solanke had opened scoring with a header.
Billing and Solanke have accounted for ten of the sixteen goals scored by Bournemouth in the second-tier in 2021-2022.
In the League One, Sheffield Wednesday saw the home side restore parity in the 90th minute in a 1-1 draw against Ipswich Town at Portman Road.
Former Everton midfielder Dennis Adeniran thought he had won it for the Owls when he executed a perfect volley to open the scoring in the 26th minute.
Adeniran has now found the net twice in seven matches since joining Sheffield Wednesday as a free agent in the summer.
Still in the division, former Golden Eaglets invitee Daniel Udoh helped Shrewsbury Town claim a 2-1 win at home to AFC Wimbledon.
His first goal of the season in the third-tier came in the 67th minute when he headed home the winner.
Watford loanee Dapo Mebude finished into the bottom corner to open the scoring for the visitors in the 32nd minute.
Finally, in League Two, David Ajiboye wrapped up the scoring as Sutton United thrashed Carlisle United 4-0 at VBS Community Stadium.
Nine minutes from time, Ajiboye found himself in a one-on-one situation with Magnus Norman and slotted past the Blues goalkeeper.
Igho Kingsley
Copyright ANS