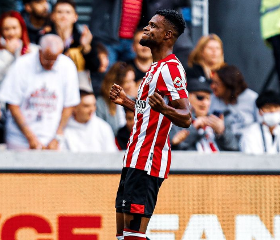 Germany head coach Hansi Flick was among the spectators at Brentford Community Stadium on Saturday evening as Brentford and Liverpool played out a six-goal thriller in the Premier League.
Onyeka was handed his first start this month, replacing Shandon Baptiste in the Bees starting line-up.
The Nigeria international had a chance to open the scoring in the 11th minute when he clipped the ball over the Liverpool goalkeeper but Matip prevented the ball from crossing the line.
On 27 minutes, Pinnock finished from close range to open the scoring but the lead lasted only four minutes as Jota headed in a brilliant cross from Henderson.
Eight minutes before half-time, Onyeka could have given the Bees the lead but his looping header drifted over the crossbar, before the Super Eagle was booked for bringing down Robertson.
Mohamed Salah became Liverpool's 10th highest scorer when he netted his 100th Premier League goal with a close range finish in the 54th minute, only for Janelt to head home a loose ball to make it 2-2 in the 63rd minute.

Curtis Jones's rocket from 25 yards seemed to be the winner but Wissa had the final say, salvaging a draw for the Bees with a goal in the 82nd minute.
With his substitution in the 68th minute, Onyeka has not gone the distance in a Premier League match since debuting on the opening day win versus Arsenal.
Ifeanyi Emmanuel
Photo Credit : brentfordfc.com