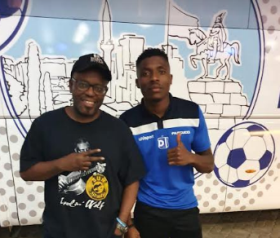 Former HNK Hajduk Split striker Chinedu Stephen has stated that he swapped the Croatian club for Albanian top league club Dinamo Tirana because he is an ambitious player and has a strong desire to shoot the Tirana based club to the top of the Albanian Super League.
"I came to Dinamo for a reason, the reason being that I am an ambitious player and the club is an ambitious club too and that makes us a very compatible match," Stephen said to allnigeriasoccer.com.

"I could have stayed back in Split but I was not getting enough game time, and when Dinamo approached me and told me their plans and ambitions I realized this was in line with my own vision for myself."

The Kano State born all action striker has started repaying the confidence in him, firing a brace on his debut against Kastrioti Krujë before going the distance in the following game versus KF Laci.

"Since I came here, I have seen a lot of professionalism from the management which matched their words before I signed and this has helped me settle down really well.


"The President of the club, the coaches, my team mates and the fans are ambitious too and all things being equal I am believing God that we will have a very good season, " he concluded.
On Stephen's curriculum vitae,  he also lists Croatian clubs NK Neretvanac and NK Dugopolje as his previous clubs.
Ifeanyi Emmanuel
Copyright ANS
All rights reserved. This material, and other digital content on this website, may not be reproduced, published, rewritten or redistributed in whole or in part without prior express written permission from allnigeriasoccer.com