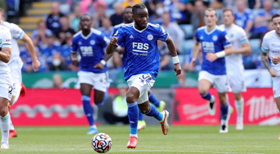 Brendan Rodgers has explained the reasoning behind his decision to take off Ademola Lookman during the second half of his side's 2-2 draw with Burnely in a Premier League clash at the King Power Stadium on Saturday evening.
The Super Eagles hopeful, who put in a brilliant performance on his full Premier League debut for Leicester City, made way for James Maddison with twelve minutes left on the clock.
Rodgers underlined that he had to bring in fresh legs because Lookman was showing signs of tiredness, a decision that was criticized by the fans at the stadium considering how well the winger was playing.
When Lookman was substituted, Leicester City were trailing by a goal as Maxwel Cornet had restored the Clarets one-goal advantage after Jamie Vardy struck to bring the game to parity.
Asked the reason Lookman was substituted, Rodgers told reporters at the post-match press conference : "The reason behind it was that obviously Ade played in the week, he's just settling into the squad and into our way of working.

"He had a good 65 minutes during the week, and so we took him off knowing that he was going to start in this game.

"I thought in particular second half he was excellent, started to tire a little bit in that period and the idea was to try and bring in another player that can create something.

"In my time here James Maddison, has in the main, been outstanding, he's obviously been unfortunate with injury so he's a player of real talent that we're bringing into the team to try and unlock the defence towards the end because we had a lot of ball and pressure in that area. That was the reason why."
Leicester City have won only one of the five matches Lookman has been involved in and it was against Championship opposition Millwall in the Carabao Cup.
Ifeanyi Emmanuel
Photo Credit : lcfc.com
Copyright ANS