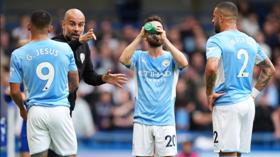 Nigerian-born former Manchester City defender Nedum Onuoha has paid tribute to Pep Guardiola for his perfect game plan during his side's 1-0 win over Chelsea in a Premier League clash on Saturday afternoon.
Onuoha revealed that the key to beating the European champions was the formation Guardiola deployed to nullify the threat of the Chelsea players.
Manchester City stunned Chelsea with a dominant display, pinning them to their own half for large periods during the game.
Brazil international Gabriel Jesus scored what proved to be the game-winning goal in the 53rd minute as he spun and fired a shot at goal which was deflected into the bottom corner.
"I thought from the goalkeeper to the frontline, everyone was magnificent," Onuachu said to Man City's official website.

"Everything just seemed to fit, tactically I think Pep got it spot on.

"I think he controlled the game at Stamford Bridge which not many teams will do this year and he did that through the players that he put in there and the system he put them in."
Looking to add more firepower to the attack, manager Thomas Tuchel brought on Kai Havertz as a replacement for N'Golo Kante on the hour mark.
Onuoha thinks that it was a wrong decision by the German football tactician as City enjoyed more freedom after the substitution of the World Cup winner.
"For Chelsea, they could never get into the flow of the game, and even when they took off Kante to try and go more attacking, I think they got worse because that’s when they got more open and City created more chances.

"For Pep and the team, they’re very well drilled and understood what was required to win that game.

"They went in as an underdog (and) I hope that’s the last time (that happens) between now and the end of the season. They deserve more credit because they’re a fantastic football team".
Onuoha recorded 116 appearances for Manchester City, scoring five goals including three in the Premier League.
Ifeanyi Emmanuel
Photo Credit : mancity.com
Copyright ANS