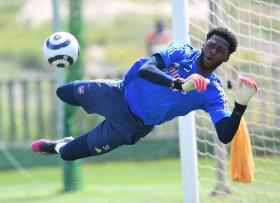 After a disastrous start to the season that saw them concede six goals against West Ham United, Arsenal are the form team in the Premier League 2 with four wins and one draw in their last five matches.
The Gunners have somehow turned around a bleak situation by bringing goalkeepers Karl Hein and Arthur Okonkwo, and striker Folarin Balogun to bolster the U23 ranks in order to get match practice even though the trio are more or less first team players.
On Saturday, Arsenal showed their Premier League 2 title credentials by playing out a 2-2 draw with current champions Manchester City at the Academy Stadium.
Okonkwo was one of five Nigeria-eligible players that tasted action against the Citizens, the others being Tim Akinola, Folarin Balogun, Mazeed Ogungbo and Ryan Alebiosu.
Manchester City U23 manager Brian Barry-Murphy praised Okonkwo for producing excellent saves that helped Arsenal get a point from the game.
"In the first half we created a lot of chances and their goalkeeper pulled off some really incredible saves," Barry-Murphy said to City's official website post-match.

"The second half was a very transitional game, we’d attack, Arsenal would attack, and I think that was down to the opponent as well."
Arsenal are breathing down the necks of Manchester City in the Premier League 2 standings with only one point separating the two.
Ifeanyi Emmanuel
Photo Credit : arsenal.com
Copyright ANS