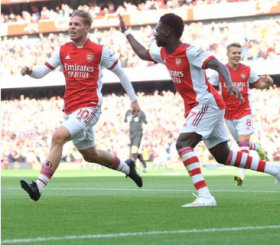 An in-form Arsenal side made it five wins from six games in all competitions after beating north London rivals Tottenham Hotspur 3-1 at the Emirates Stadium on Sunday evening.
Arthur Okonkwo and Folarin Balogun, who were both promoted to the Gunners first team on a permanent basis before the start of the season, were on U23 duties in the Premier League 2 yesterday so were not called up for the game against Tottenham Hotspur.
Tobi Omole, a product of Arsenal's Hale End Academy, has been registered by Tottenham Hotspur as a first teamer on their Premier League roster but was not listed to face his former employer.
Smith Rowe turned home a low cross from onetime Nigerian Federation target Bukayo Saka to open the scoring in the 12th minute.
Pierre-Emerick Aubameyang doubled Arsenal's advantage on 27 minutes, before Saka netted another break-away goal in the 34th minute, firing into the far corner, after Harry Kane had lost the ball.
Son Heung-Min converted from twelve yards to reduce the deficit with eleven minutes remaining.
The win sees Arsenal climb to tenth in the Premier League standings with nine points, same number of points as Tottenham Hotspur who have scored fewer goals.
Ifeanyi Emmanuel
Photo Credit : arsenal.com