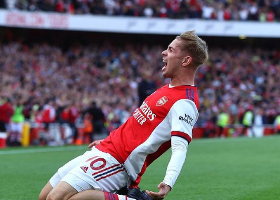 Arsenal secured bragging rights in the north London derby, beating Tottenham Hotspur 3-1 at the Emirates Stadium with two of their academy products playing key roles in the win.
Emile Smith Rowe got them on their way in the 12th minute, scoring from ten yards out after he was set up by Bukayo Saka, who also got his name on the scoresheet in the 34th minute.
Sunday's win sees Arsenal climb to tenth in the Premier League standings, above Tottenham Hotspur, though the two teams are level on points.
Smith Rowe felt over the moon after scoring his first goal against Tottenham Hotspur, saying in his post-match interview that it was the best day of his life.
Repeating the comment, he posted on Instagram shortly after the game, 'Best day of my life!'.
At least five players of Nigerian descent, including Joseph Olowu, Folarin Balogun, Arthur Okonkwo, Southampton winger Nathan Tella and Nigeria U23 international Tom Dele-Bashiru, were among those to respond to Smith Rowe's post.
While Balogun and Okonkwo are teammates with Smith Rowe, Tella and Olowu played with him at the Arsenal academy, and Dele-Bashiru faced the Arsenal number 10 in the U18 Premier League and Premier League 2 during his time with Manchester City.
Balogun and Okonkwo were not called up for the big clash with Spurs due to their involvement with the U23s in the Premier League 2 on Saturday.
Here's how the five Anglo-Nigerian starlets responded to Smith Rowe's post :
Nathan Tella - 'Hero'.