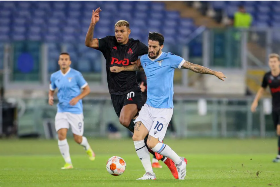 Chelsea loanee Faustino Anjorin made his full debut for Lokomotiv Moscow in a Europa League fixture against a Lazio side coached by ex-Blues manager Maurizio Sarri at the Stadio Olimpico - Rome on Thursday.
The England youth international of Nigerian descent had made four appearances off the bench prior to the visit to the Italian capital, against KS Samara, Ural and  Khimki in the Russian Premier League, and Marseille in the Europa League.
Lazio sealed a comfortable 2-0 win thanks to close range efforts from Tomas Bašić and Patric in the first half.
Manager of the Railwaymen, Marko Nikolic set up his team in a 4-4-2 formation with Anjorin deployed as one of the two center forwards.
It should have been 1-1 in the 26th minute but the Anglo-Nigerian swerved a shot past the angle of the post after driving from his own half.
On his starting debut, Anjorin subbed out eight minutes from time as Lokomotiv Moscow suffered their first loss in eleven matches across all competitions.
The Chelsea-owned player has been loaned out to Lokomotiv for the remainder of the season with an option to buy and buy-back option included in the deal.
Ifeanyi Emmanuel
Photo Credit : uefa.com
Copyright ANS