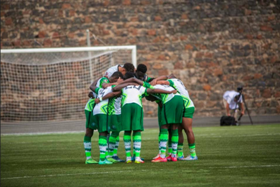 The Nigeria Football Federation revealed on Monday morning that CSKA Moscow dazzler Chidera Ejuke is the first invited player to report for international duty ahead of the national team's 2022 World Cup qualifier against Central African Republic at the Teslim Balogun Stadium.
The second player spotted at the Super Eagles' Eko Hotels & Suites camp in Victoria Island is Boavista loanee Chidozie Awaziem.
The Super Eagles camp officially opened on Sunday, October 3, with the officials hitting base in Lagos.
A week ago, Ejuke caused a scare after suffering a leg injury in a Russian Premier League match against FK Nizhny Novgorod, leading to his substitution in the 82nd minute.
After the initial scare, the winger made a speedy recovery for Saturday's goalless draw against Krasnodar, even going the distance.
Nigeria manager Gernot Rohr will be hoping nothing goes wrong again three days before the meeting with Central African Republic.
He is already without Wilfred Ndidi, Oghenekaro Etebo, Alex Iwobi and Terem Moffi who have all withdrawn from the roster due to injuries.
A fifth player in Henry Onyekuru could not be drafted as a late replacement for Iwobi after suffering a fracture in training before Olympiakos' Super League clash against Panathinaikos.
Ifeanyi Emmanuel
Copyright ANS