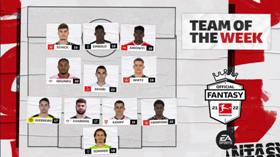 Taiwo Awoniyi has been included in the German Bundesliga Team of the Week by the official website of the Bundesliga.
The 2013 U17 World Cup winner scored Union Berlin's 100th Bundesliga goal in the 69th minute as they came from behind to register a 2-1 victory over Mainz on Sunday.
At minute 73, the former Liverpool striker tallied his eighth of the season in all competitions to secure three vital points for the capital side.
Shortly after Awoniyi's two goals, the Nigeria Football Federation announced that he has been added to the Super Eagles roster for the 2022 World Cup qualifying matches against Central African Republic, as replacement for the injured Lorient frontman Terem Moffi.
Awoniyi found the net in each of his first three games for Union Berlin after joining on a permanent deal from Liverpool but fired blanks in his next three before bagging a brace versus Mainz 05.
In a 4-3-3 formation, Awoniyi was deployed as the right-sided attacker and eared 19 points for his efforts in the win against Mainz.
Igho Kingsley
Copyright ANS