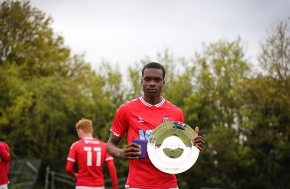 Charlton Athletic thrashed Southampton 4-1 in a Papa John's Trophy clash on Tuesday evening, with four youngsters of Nigerian descent on parade at the Valley.
While Oludare Olufunwa and Sheyi Ojo's cousin, Zuriel Otseh-Taiwo started for the Saints B team, Deji Elerewe and Diallang Jaiyesimi were named in Charlton Athletic's starting line-up.
The Addicks were cruising at halftime as Jayden Stockley bagged a brace before Ben Purrington struck in stoppage time to make it 3-0.
In the second half, Olly Lancashire reduced the deficit fifteen minutes from time but Jason Pearce headed home in the 92nd minute to restore the three-goal buffer.
Allnigeriasoccer.com can exclusively report that Manchester United, Chelsea and West Ham United talent spotters were present at the Valley to run the rule over the exciting talents on both teams.
One of the aforementioned players of Nigerian descent who caught the eye during the EFL Trophy clash was Elerewe, a promising center back with five first team appearances under his belt in the new season.
The 18-year-old, a second-year scholar, was offered his first professional contract at Charlton last month.
Elerewe has yet to put pen to paper on the new deal and could leave the London club as a free agent in June 2022 if he is not convinced to extend his stay, but Charlton will demand compensation from his next club due to his age.
Ifeanyi Emmanuel
Copyright ANS