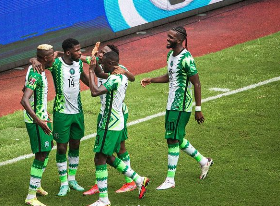 The Super Eagles got back to winning ways Sunday evening on matchday 4 of the 2022 World Cup qualifiers against the Central African Republic after a humiliating 1-0 defeat in the reverse fixture on Thursday in Lagos against the same opposition.
Izuchukwu Okosi presents the five takeaways from the game in Douala.

Sparta Rotterdam goalkeeper Maduka Okoye was left on the bench in the 1-0 defeat to Central African Republic on Thursday in Lagos after a said missed flight caused his late arrival to the camp.

However the Sparta Rotterdam goalie was restored to the starting line up in Douala. This shows that he is unquestionably Rohr's first choice goalkeeper almost at the detriment of the other keepers who might be on better forms.

2. CAF Must Introduce VAR To Qualifiers

The Confederation of African Football (CAF) must introduce the Video Assistant Referee (VAR) to the 2022 World Cup qualifying campaign especially in the last rounds of Qualifiers in March 2022.

There has been some controversial calls by the men with the whistles in the qualifiers.

Victor Osimhen was stamped on by a CAR defender on the opposition box but was not rewarded with a deserved penalty.

There has been other spurious decisions in the matches across the continent thus far.

A small number of Nigerian fans were in Douala to support the team. It was encouraging to hear them sing from the stands calling: "All We Are Saying, Give Us One Goal" even when the goals were not forthcoming.

The fans, who booed their players in Lagos after conceding to the opponents, were in their praise singing best on Sunday evening and their faith were rewarded with the first half goals.

Head coach Gernot Rohr opted to start captain Ahmed Musa in his 100th appearance for the Super Eagles in a competitive game.

The experienced campaigner brought calmness to the team and on the basis of his influence, he should have started against the opponents on Thursday.

The poor guy was seen trying frantically to explain something to the duo with the other player seemingly showing more empathy towards him.

The goalkeeper could not have stopped both strikes by Balogun and Osimhen as they were of great qualities.