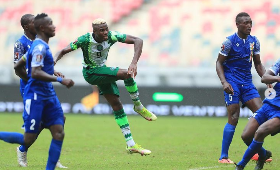 Nigeria manager Gernot Rohr was delighted as he spoke to the media shortly after the Super Eagles registered a convincing 2-0 win over Central African Republic in a 2022 World Cup qualifying match on Sunday afternoon.
The Super Eagles cemented top spot in Group C with two rounds left thanks to first half strikes from Leon Balogun and Victor Osimhen.
The Glasgow Rangers defender, who was at fault for the last minute goal scored by Karl Namnganda in the first leg three days ago, made amends today when he stabbed Awaziem's cross into the net to open the scoring in the 29th minute.
Napoli striker Osimhen latched onto a pass from William Troost-Ekong and fired past goalkeeper Prince Samolah to double the advantage just before half-time.
Speaking post-match, Rohr gave his view on the win, praised Nigeria's latest centurion Ahmed Musa for his leadership skills, provided an injury update and sent a message to the Super Eagles fans.
Here's every word Rohr said in a chat with Super Eagles Media Officer Babafemi Raji :
Coach Gernot Rohr, CAR 0 Nigeria 2 after ninety minutes coach.

"It was a good reaction of my team, we lost the other day, very unlucky    the last minute so everybody wanted to take a revenge.

"They did it very well, even we could score a third goal. We changed also the system. We played only with three at the back and I think this helped us also and with the leadership of Musa to win this game.

"It is not easy to beat this Central African Republic, you saw it. They made a lot of fouls, a lot, but fortunately we don't have any big injury.

"Now we can prepare with calm the next games in November and I hope that everything will be fine at the end of the day".

Coach if you were to say something to Nigerian fans after this victory.

"Nobody was in the stadium but I think our fans were watching the match on television. Thank you for your support all the time.

"They try what they do, they are fighting, we have a young team, they can make some mistakes but they never give up."
Ifeanyi Emmanuel
Copyright ANS