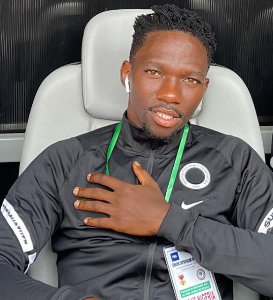 Former Chelsea central defender Kenneth Omeruo was delighted with Nigeria's convincing 2-0 win over Central African Republic in a 2022 World Cup qualifier on Sunday afternoon and highlighted that the Super Eagles dominated the opponents from start to finish.
Balogun pounced on a lofted pass and fired home from close range to open the scoring in the 29th minute and Victor Osimhen gave the Super Eagles a two-goal cushion just before half-time.
Nigeria could have scored at least two more goals in the second half but Osimhen saw his effort cleared off the line and exciting substitute Chidera Ejuke's shot was saved by goalkeeper.
These days, Omeruo is number three in manager Gernot Rohr's pecking order of center-backs, behind William Troost-Ekong and Leon Balogun in that order.
Sixteen minutes from time, the former Golden Eaglets and Flying Eagles star was introduced off the bench to replace the injured Leon Balogun and ensured goalkeeper Maduka Okoya kept his second clean sheet in World Cup qualifying.
Speaking to Hitvbiz upon the team's arrival in Lagos on Sunday night, Omeruo stated : "I feel happy, we went into that game knowing full well that we didn't win the first one and we had to win that game to show that we are better than them when it comes to playing on a very good pitch.

"We had to also talk to ourselves, make everyone understand that it's a World Cup qualifier and it's very important for us.

"I think we played a very, very good game. We dominated the game, everyone gave their best out there today. It's not enough until we qualify but I think it's a good step".
After four rounds of matches in Group C of the 2022 World Cup qualifiers, Nigeria are leading the way with nine points accumulated, two more than Cape Verde who left it late to beat Liberia on Sunday evening.
Ifeanyi Emmanuel
Copyright ANS