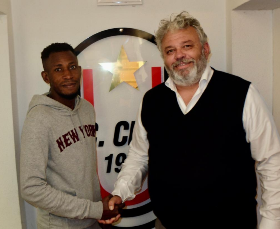 With a statement on their official website, Italian Serie D club AC Crema 1908 have announced the capture of former AC Milan winger Nnamdi Oduamadi.
Oduamadi was unemployed for more than two years, following his departure from KF Tirana in July 2019.
He was on the books of AC Milan for nine years and took in loan spells at Torino, Varese, Brescia, Crotone, Latina,
Şanlıurfaspor and HJK Helsinki during his time with the Red and Blacks.
Oduamadi is credited with 41 goals in 179 appearances combined in the Serie A and Serie B.
In his first words as a player of AC Crema, Oduamadi said : "I am ready and motivated . I will enter the field with the desire to give my contribution and reward the trust given to me by the club and the coach.
"I immediately found harmony with my teammates and I really like the black and white environment, I feel at home. I've never played in Serie D but I know it's a competitive championship.
"There are strong teams and many young people eager to demonstrate. A new experience that stimulates me and encourages me to give my best. Thanks again to President Zucchi for the important occasion ".
Oduamadi was a member of the Super Eagles squad to the 2013 FIFA Confederations Cup and scored a hat-trick in a 6-1 rout of Tahiti in the group stage.
Ifeanyi Emmanuel
Copyright ANS