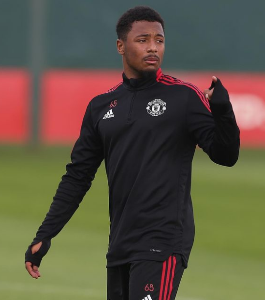 Manchester United boss Ole Gunnar Solskjaer promoted Dutch-Nigerian striker Dillon Hoogewerf to first team training this week.
Providing a training update, United confirmed via their official website on Monday that Hoogewerf was among the eight youngsters involved in first team training, the others being Alvaro Fernandez, Bjorn Hardley, Joe Hugill, Marc Jurado, Charlie McNeill, Charlie Savage and Charlie Wellens.
Solskjaer gave an opportunity to Hoogewerf to train with the senior team with several first teamers away on international duty with their respective nations.
Football-Oranje suggested in August that the Dutch-Nigerian would be shipped out on loan to get first team experience under his belt but the youngster stuck with United when the summer transfer window closed for business and he's now a regular for the development squad.
Hoogewerf has been named in every matchday squad for Premier League 2 games with the exception of the 3-1 loss to Arsenal on September 11.
The 2003-born player has proven that he can adapt to play in multiple roles across the attack, including center forward, second striker, left winger, right winger and attacking midfielder.
Signed from Ajax Amsterdam in July 2019, Hoogewerf signed his first professional contract with Manchester United in March 2020.
Ifeanyi Emmanuel
Photo Credit : manutd.com
Copyright ANS