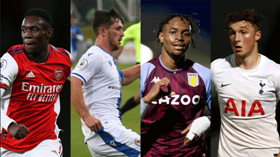 Nigeria-eligible striker Caleb Chukwuemeka has been named Premier League 2 Player of the Month for September 2021, the Premier League informed via their official website on Monday.
To win the award, Caleb Chukwuemeka, whose younger brother Carney is also on the books of Aston Villa, beat off stiff competition from another striker of Nigerian descent in Arsenal's Folarin Balogun, Sam Burns (Blackburn Rovers), Alfie Devine (Tottenham Hotspur), Baba Fernandes (Nottingham Forest), Joe Gelhardt (Leeds United) and Jesurun Rak-Sakyi (Crystal Palace).
Caleb Chukwuemeka was chosen as the most outstanding Premier League 2 player for September by the Premier League's Football Development Panel after scoring five goals and bagging an assist in three matches.
The 19-year-old went home with the match ball in Aston Villa's 4-2 win against West Brom on September 17 and ten days later, scored a brace and registered an assist in an 8-0 rout of Stoke City.
He was a reserve option for first team manager Dean Smith in the third round of the Carabao Cup on September 22.
Chukwuemeka joined Aston Villa from Northampton Town for an undisclosed fee in August 2021.
Igho Kingsley
Copyright ANS