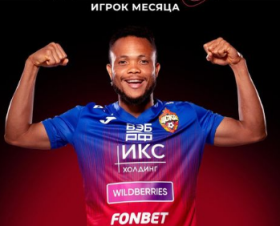 Super Eagles dazzler Chidera Ejuke has been voted CKSA Moscow's Player of the Month for September 2021, informs the official website of the Army Men.
According to the poll on the club's official website, Ejuke won 55 percent of the vote to place first ahead of Igor Akinfeev (21 percent) and Anton Zabolotny (20 percent).
The Nigeria international was recognized by the fans as CSKA Moscow's best player in league matches against Arsenal Tula and Nizhny Novgorod.
Ejuke also started for CSKA Moscow as they registered a 1-0 win in the derby against Spartak Moscow, helping his team collect seven points from a possible nine.
The former SC Heerenveen star won the clubs' Player of the Month award for July to August.
Ejuke was included in the Russian Premier League Team of the Month for September by football statistics website Whoscored, deployed on the left side of midfield in a 4-4-2 formation.
The 23-year-old tasted action in Nigeria's two World Cup qualifiers this month against Central African Republic and was impressive after coming off the bench in the second leg in Douala.
Igho Kingsley
Copyright ANS