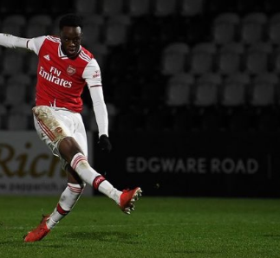 Arsenal came from behind to register a 4-3 victory over League Two club Newport County in a Papa John's Trophy clash staged at Rodney Parade on Tuesday night.
Several Nigerian players were in action tonight, with goalkeeper Ovie Ejeheri, center back Mazeed Ogungbo, fullback Ryan Alebiosu and winger Joel Ideho starting for the Gunners, while Newport County's Timmy Abraham, younger brother of former Chelsea star Tammy Abraham, entered the game as a substitute at half-time.
Jordan Greenidge put The Exiles ahead in the 19th minute, before goals from Omari Hutchinson and Salah Oulad M'Hand saw the visitors go 2-1 up after 52 minutes.
Abraham equalised in the 62nd minute as his shot went in via a deflection, making it two goals in as many games in the EFL Trophy for the  Fulham loanee.
Newport County took the lead again in the 68th minute and would have fancied their chances of winning the game but two Nigeria-eligible players combined to bring the game back to parity with four minutes left on the clock.
James Olayinka slotted home from inside the box after he was teed up by Alebiosu and there was more drama to come as Sagoe Jr scored the game-winning goal in the second minute of stoppage time.
Arsenal duo Tim Akinola and Nathan Butler-Oyedeji watched proceedings from the bench.
Ifeanyi Emmanuel
Copyright ANS