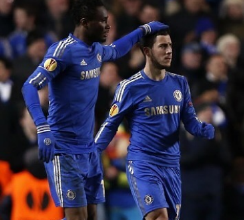 Chelsea legend John Obi Mikel has revealed that Norwegian club Lyn Fotball attempted to brainwash him into signing for Manchester United instead of Chelsea in 2005.
Manchester United made the first move to sign Mikel after the central midfielder impressed their scouts at the UEFA-CAF Meridian Cup in Egypt, and he was invited to train at Carrington before the 2003 Fifa U17 World Cup.
But Chelsea hijacked United's move for the former Super Eagles captain, sending him to Lyn in order to meet the requirements for a UK work permit.
The Red Devils wanted to sign one of the most precocious talents in world football back then but did not negotiate with Mikel's bonafide agent John Shittu.
The other actors involved were Lyn director Morgan Andersen, agents Rune Hauge, Daniel Fletcher and Jerome Anderson, managers Alex Ferguson and Jose Mourinho, and Mikel's father.
Mikel eventually joined Chelsea a year later after they paid £16 million combined to Manchester United and Lyn.
Speaking to the Athletic via Sports Illustrated, Mikel said : "They were speaking to me every day saying, ‘Sign for United, sign for United’, and there was the contract in front of me.
"But Chelsea made it clear they weren’t going to give up. They wanted me back".
Added Mikel : "I had been sent by Chelsea to play there because I was not 18. I was from Africa and needed to play a certain amount of games (to get a permit).

"They sent me there to play, to be at a school and study so I could join at 18 when my age was right. Nothing could be signed while I was still 17."
Mikel enjoyed success at Chelsea, winning the Champions League, Europa League, Premier League, FA Cup, League Cup and Community Shield in his ten-and-a-half-year association with the club.
Ifeanyi Emmanuel
Photo Credit : chelseafc.com
Copyright ANS