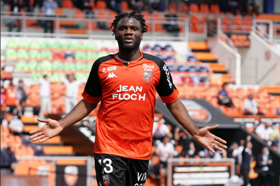 Lorient are sweating over the fitness of Terem Moffi three days before facing Marseille in the French Ligue 1 in a gameweek ten clash at the Orange Vélodrome.
Moffi injured his collarbone after landing awkwardly following a duel with Clermont goalkeeper during Lorient's last game before the international break on October 3.
A late call-up for Alex Iwobi for the 2022 World Cup qualifiers against Central African Republic, he was later replaced on the Nigeria roster by Union Berlin's Taiwo Awoniyi.
Lorient have not yet released an official update on Moffi's fitness and there are now serious doubts over whether he will be included in the matchday squad versus Marseille.
However, French newspaper Ouest France has reported that Moffi trained separately from the rest of his Lorient teammates during Wednesday's workout.
The Super Eagle was put through his paces by Lorient's physical trainer Pierre Bazin.
So far this season, Moffi has directly participated in four goals (2 goals, 2 assists) from nine appearances in the French top-flight, all of which he started.
Igho Kingsley
Photo Credit : fclweb.fr
Copyright ANS