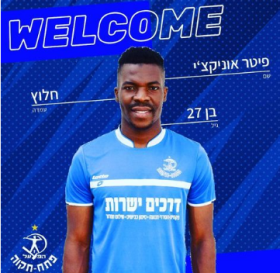 Israeli Liga Leumit side Hapoel Petah Tikva have completed the signing of former Nigeria U23 international Peter Onyekachi.
The former Enyimba center forward has joined Hapoel Petah Tikva as a free agent following the expiration of his contract with Vietnamese team SL Nghe An FC.
Onyekachi has played in Israel before, wearing the colours of Hapoel Acre in the Premier League in the 2017-2018 campaign and the following season he turned out for second-tier club Hapoel Kfar Saba, with whom he qualified for the Premier League at the end of the season, scoring eight goals in all competitions.
In his first words as a player of Hapoel Petah Tikva, Onyekachi said : "I am happy to return to play in Israel and I am proud to come to a big club like Hapoel Petah Tikva.
"I heard a lot of good things about the team, and now the goal is to prove on the field."
Onyekachi's contract with Hapoel Petah Tikva will keep him at the club until the end of the 2021-2022 season.
Igho Kingsley
Copyright ANS