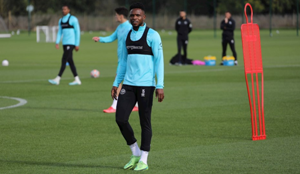 Brentford boss Thomas Frank will have at his disposal Frank Onyeka when his side face off with Chelsea in an eagerly anticipated Premier League match at Brentford Community Stadium on Saturday, October 16.
The summer signing from FC Midtjylland came back from international duty with no issues, putting him in contention to be included in the Bees matchday 20 versus the European champions.
When Onyeka made his competitive Nigeria debut against Central African Republic on October 7, he became the 50th player who has been capped at full international level while contracted to Brentford, and also took to the pitch in the reverse fixture, lasting the distance in both matches.
Today, Friday, Brentford through their official website, published training images of their last session before the visit of Chelsea and Onyeka was one of the players pictured during the workout.
Apart from a Covid-related absence that kept him out of the squad for the Aston Villa game, the holding midfielder has been involved in all the games played by Brentford in the Premier League.
Brentford are unbeaten against London opposition in their maiden Premier League season, beating Arsenal on the opening night, held Crystal Palace to a goalless draw, before a 2-1 win at West Ham United in their last match before the international break.
Ifeanyi Emmanuel
Photo Credit : Brentford  FC
Copyright ANS