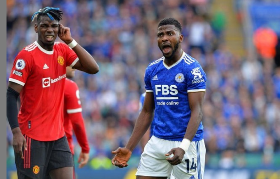 Leicester City manager Brendan Rodgers has explained the motive behind the substitution of Kelechi Iheanacho during his side's 4-2 win over Manchester United in a Premier League clash at the King Power Stadium on Saturday afternoon.
The Nigeria international worked exceptionally hard, causing Leicester City old boy Harry Maguire all sorts of problems especially in the first half.
Youri Tielemans curled the ball over over De Gea and into the top corner after a stumble by Maguire not reacting to Iheanacho in the build-up to the goal.
The Belgian bagged a 31st minute equaliser after collecting a pass from the Nigeria international striker, who was substituted with a little under a quarter of an hour left.
Rodgers has revealed that Iheanacho, who started the recent back-to-back 2022 World Cup qualifiers against Central African Republic, made way for Patson Daka due to fatigue.
When asked about the performance of James Maddison at the post-match press conference, Rodgers replied : "He was unlucky with a couple of through balls and then just towards the end him and Kels was just starting to tire a little bit and we could then bring on the other two guys to influence the game."
Of his eleven appearances in all competitions so far this season, Iheanacho has lasted the distance in only one game, against Millwall in the third round of the Carabao Cup last month.
Ifeanyi Emmanuel
Copyright ANS