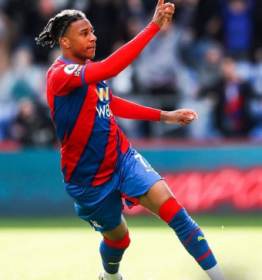 Arsenal came from behind to earn a 2-2 draw with Crystal Palace in a Premier League clash at the Emirates Stadium on Monday night.
Folarin Balogun and goalkeeper Arthur Okonkwo were both on U23 duties in the Premier League 2 this past weekend and were omitted from Arsenal's matchday squad while Nigerian Federation target Michael Olise entered the game as a substitute to replace Jordan Ayew with nineteen minutes remaining.
Pierre-Emerick Aubameyang gave the north London club the lead in the ninth minute when he pounced on a loose ball and put it away with his left foot.
Goalkeeper Aaron Ramsdale made some decent saves to prevent the visitors from bagging an equaliser in the opening forty-five minutes.
Christian Benteke and Odsonne Edouard paired up front in the absence of Wilfried Zaha scored two goals in the second half to put Palace 2-1 up after the Gunners were caught in possession on two occasions.
Edouard smashed the ball into the net in the 73rd minute after he was teed up by Olise, the attacking midfielder's second goal involvement in as many games.
With literally the last kick of the game, Alexandre Lacazette equalised to save a point for manager Mikel Arteta's team.
Arsenal, who are unbeaten in their last five Premier League matches, occupy 12th position with eleven points accumulated and the Eagles are fourteenth.
Igho Kingsley
Photo Credit : cpfc.co.uk
Copyright ANS