...the complete Nigerian football portal
Subscribe
Osimhen could be teammates with Messi as PSG planning to raid Napoli for N48b-rated striker
Published: October 21, 2021 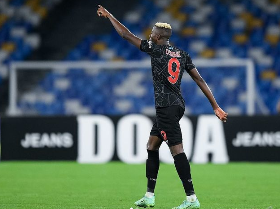 Victor Osimhen could be teammates with three of the best players on the planet in the shape of Lionel Messi, Neymar and Kylian Mbappe if transfer speculations linking him with a return to the French Ligue 1 are anything to go by.
Italian transfer market portal Calciomercato claims that Paris Saint-Germain are targeting a move for the Nigeria international to replace Mauro Icardi.
Despite signing a lucrative contract with the Parisians until June 2024, the former Inter Milan goal poacher has not played much in the new season, making six starts from a possible fourteen in all competitions.
PSG are looking to sell him as from the January transfer window to pave the way for the acquisition of Osimhen.
Bought from Lille for a fee of 70 million euros in 2020, the 2015 U17 World Cup Golden Boot winner is now valued in the region of at least 100 million euros (approximately N48 billion in Nigerian currency).
It is believed only the likes of PSG, Manchester City, Manchester United, Chelsea, Real Madrid and Bayern Munich can meet Napoli's asking price for Osimhen.
The 22-year-old will start on the bench in Napoli's Europa League meeting with Legia Warsaw on Thursday, manager
Luciano Spalletti suggested at the pre-match press conference yesterday.
Ifeanyi Emmanuel
Copyright ANS