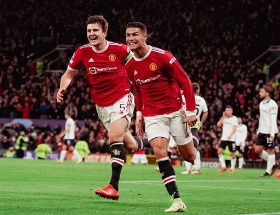 Premier League giants Manchester United came from behind to defeat Atalanta 3-2 in a UEFA Champions League match at Old Trafford on Wednesday night.
Atalanta went into the break with a two-goal advantage after strikes from Mario Pasalic and Merih Demiral but a brilliant performance in the second half earned Ole Gunnar Solskjaer's side all three points.
Seven minutes into the second half, Marcus Rashford gave the Red Devils a lifeline when he fired into the far corner, before Manchester United captain Harry Maguire's fantastic right-footed finish made it 2-2 at minute 75.
With less than ten minutes to go, Cristiano Ronaldo headed home an excellent delivery from Luke Shaw to become the toast of Manchester United fans.
Shola Shoretire wasn't at the disposal of Solskjaer for the visit of the Italian Serie A side as he was on duty with the U19 squad in the UEFA Youth League few hours before the start of the Champions League clash.
The England U19 international of Nigerian descent appears pleased by United's thrilling win over Atalanta after liking a social media post by Maguire after the match. 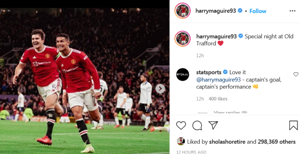 Maguire posted on Instagram : "Special night at Old Trafford ".
Shoretire became Manchester United's youngest ever player in a European match, at the age of 17 years and 23 days when he replaced Mason Greenwood in the 76th minute of a goalless draw versus Real Sociedad in a Europa League match back in February 2021.
Igho Kingsley
Copyright ANS