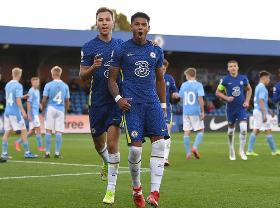 Talented striker of Nigerian descent Bryan Fiabema has taken to social media to celebrate Chelsea's come-from-behind win over Malmo in the UEFA Youth League on Wednesday afternoon.
Two-time champions Chelsea looked dead and buried as they were trailing 2-0 with around half an hour left after a brace from Bjerkebo, but showed character as they fought back to snatch all three points.
In an extraordinary match at Kingsmeadow, Chelsea improved in the last third of the contest and got the goals they were looking for.
Rankine and Simons found the net to equalise for the Blues, Fiabema made it 3-2 before Silko Thomas put the cherry on top of the cake.
With thirteen minutes left on the clock, the Norwegian-Nigerian striker turned the game around when his downward header beat goalkeeper Ellborg after a deep ball to the far post.
Writing on Instagram, Fiabema said : "The comeback is real".
Fiabema's five goals for Chelsea youth teams in 2021-2022 have come in three different competitions - Premier League 2, EFL Trophy and UEFA Youth League.
Ifeanyi Emmanuel
Copyright ANS
All rights reserved. This material, and other digital content on this website, may not be reproduced, published, rewritten or redistributed in whole or in part without prior express written permission from allnigeriasoccer.com