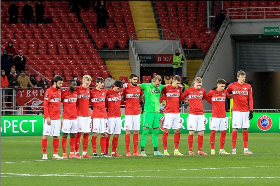 Spartak Moscow squandered a two-goal lead in an embarrassing 4-3 loss to Leicester City in a Europa League matchday three fixture at Stadion Spartak in Moscow on Wednesday evening.
After halving the deficit just before the break, the Foxes impressed in the second half, scoring three goals through Patson Daka and turned what could have been a disaster into a comfortable victory - their first in the group stage.

Former Chelsea wing-back Victor Moses had a great individual performance on a personal level, providing the assists for two of three goals netted by the Red-and-Whites, but the former Nigeria international has admitted that the assists meant nothing to him because of the three points they threw away.

Speaking to Spartak's official website post-match, Moses said : "Assists doesn't mean really nothing to me, the most important thing for me is we should have won the game today.

"It's not about the assists, it's not about individual right now . I just want the team to win, when the team wins that's when I'm happy, so assist is nothing to me".

Moses had kind words for Patson Daka, calling him a good player, after learning that the Zambia striker got on the scoresheet four times.


"His movement is very good in and around the box, he gave our defenders a little bit of problem today. Fair play to him and I wish him all the best".
Moses and his Spartak teammates have another big clash coming up, against Zenit St. Petersburg in the Russian Premier League this weekend, and then face Rostov before traveling to England for their reverse fixture against Leicester City in the first week of November.
Ifeanyi Emmanuel
Photo Credit : spartak.com
Copyright ANS
All rights reserved. This material, and other digital content on this website, may not be reproduced, published, rewritten or redistributed in whole or in part without prior express written permission from allnigeriasoccer.com