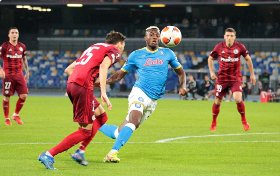 Allnigeriasoccer.com's round up of the Nigerian players who got on the scoresheet in European matches that took place on Thursday, October 21.
In the European Conference League, former Liverpool striker Taiwo Awoniyi took his tally for the season to ten in all competitions after netting a consolation for Union Berlin in a 3-1 loss to Feyenoord in Rotterdam.
Ten minutes before half-time, the newly-capped Nigeria international pulled a goal back when he headed the ball into the net.
In the same competition but in Group D, Super Eagles striker Stephen Odey continued his fine form with his eighth of the season in all competitions as Danish side Randers forced Jablonec to a 2-2 draw.
The Racing Genk loanee netted a penalty in the 90th minute to bring the game back to parity and was also on target in the 35th minute, cancelling out a brace from Cvancara.
In Group F, former AC Milan striker Ezekiel Henty doubled the advantage in the 84th minute as Slovan Bratislava defeated Lincoln Red Imps FC 2-0 at Národný futbalový štadión - Bratislava.
It was his sixth goal in three different European competitions this season : Europa League qualifying, Champions League qualifying and the Europa Conference League.
Last but not least, Napoli eased past Legia Warsaw at Stadio Diego Armando Maradona in Group C of the Europa League.
Thirteen minutes after coming off the bench, Victor Osimhen made it 2-0 with a powerful finish from a tight angle after a brilliant pass from Insigne.
Osimhen has now registered his name nine times on the scoresheet in 2021-2022 after scoring in his third consecutive appearance in the Europa League.
Ifeanyi Emmanuel
Photo Credit : uefa.com
Copyright ANS