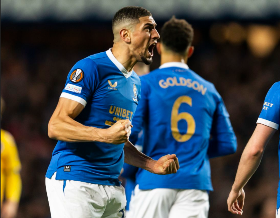 Glasgow Rangers boss Steven Gerrard has provided a worrying injury update on Leon Balogun, less than two weeks before Nigeria manager Gernot Rohr is expected to announce his roster for two crucial 2022 World Cup qualifiers against Liberia and Cape Verde.
Balogun netted his first goal in Rangers colours in the 18th minute as the Scottish Premiership champions defeated Brondby 2-0 in the Europa League, but it turned out to be a bittersweet night for the central defender after he went off injured in the 64th minute, to be replaced by Calvin Bassey.
Gerrard's update on Balogun was not encouraging with the former Liverpool captain revealing that the number 26 suffered what appears to be a hamstring-related injury.
It's not something that he would like to hear but the fact remains that the former Brighton & Hove star is an injury-prone player and those injuries have limited his appearances for the Super Eagles to only 40 games since his international debut more than seven years ago.
Speaking at the post-match press conference, Gerrard said : "There is an update, but without him having an MRI scan or being assessed once everything is calm. He has felt something in there.

"We are hoping we have got to it before there is a tweak or any muscle damage.

"We are hoping it is a little bit of tightness and we will know in the next 24 hours. I will certainly be praying tonight."

"We will work that out in the next 24 hours and hopefully he will pull through because he is important for us. I thought his performance was top tonight as well."
Balogun has started three of the four games played by the Super Eagles in the 2022 World Cup qualifiers, scoring one goal.
Igho Kingsley
Photo Credit : rangers.co.uk
Copyright ANS