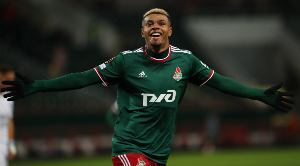 Lokomotiv Moscow finished the first round of the Europa League group stage bottom of the Group E standings with one point from three matches.
Manager of the Railwaymen, Markus Gisdol could not count on the services of the England youth international of Nigerian descent Faustino Anjorin against Galatasaray and it has come to light that the Chelsea-owned winger was not at the disposal of the German football tactician due to injury.
Gisdol provided a positive update on the injury sustained by Anjorin, saying that the Anglo-Nigerian teenager could be back on the pitch soon.
Without the number 10, Lokomotiv Moscow were beaten 1-0 by Galatasaray at the RZD Arena on Thursday, with Akturkoglu netting the game-winning goal eight minutes from time.
Speaking at the post-match press conference, Gisdol stated : "There are many players in our treatment room now, especially attackers. And Anjorin and Kamano.

"Therefore, today I had almost no options to strengthen the game from the bench, especially the forwards.

"I hope that Anjorin will recover in the very near future and will be able to play for a few minutes."
Since joining the Muscovites in September, Anjorin has been involved in seven matches across all competitions and scored his first senior goal against Marseille in their opening match of the Europa League.
Ifeanyi Emmanuel
Photo Credit : fclm.ru
Copyright ANS