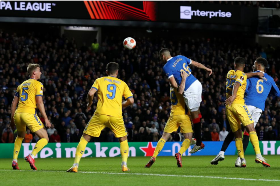 Chelsea academy product Ola Aina and ex-Tottenham Hotspur youth teamer William Troost-Ekong have sent messages to Super Eagles teammate Leon Balogun after he opened his goalscoring account for Glasgow Rangers on Thursday night.
Balogun scored his first goal for the Super Eagles on October 10 in a 2022 World Cup qualifier against Central African Republic and eleven days later, the central defender followed that up by opening the scoring again in another 2-0 win.
From a set play worked to perfection, the former Brighton & Hove man wasn't picked up and he rose to head home a fine delivery from Tavernier in the 18th minute.
It was his first goal at club level since he got on the scoresheet against Crystal Palace while wearing the colours of the Seagulls in December 2018.
The injury suffered by Balogun around the midway point of the second half was the only blight to his brilliant performance.
Writing on Instagram on Friday morning, Balogun said : "Those European nights at Ibrox - 3pts, clean sheet & on the scoresheet".
Replying to Balogun's post, Aina said : "He can’t stop".
Troost-Ekong added : "Turning into a bagsman".
Balogun will be assessed by Rangers medics ahead of their Scottish Premiership clash against St. Mirren on Sunday, October 24.
Ifeanyi Emmanuel
Photo Credit : uefa.com
Copyright ANS