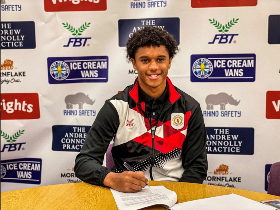 Rio Adebisi has pledged his loyalty to Crewe Alexandra by signing a new contract, the League One club informed through their official website on Monday.
The new agreement between club and player will keep the Nigeria-eligible defender at the Railwaymen until at least June 30, 2024, if the two parties honour the deal.
Crewe Alexandra have tied him up to a new deal to avoid him leaving on a free transfer at the end of this season.
Adebisi has established himself as a regular in Crewe Alexandra's first team and is credited with 36 appearances in all competitions, including 24 starts in the Football League at the age of 21.
The versatile leftback was named Crewe Alexandra's Breakthrough Player of the 2020-2021 season after a good second half of the campaign.
Adebisi has played nonstop at the Railwaymen since signing schoolboy forms at the age of twelve.
Born in Northwich to an English mother and Nigerian father, Adebisi has committed his international future to the three-time African champions.
Ifeanyi Emmanuel
Photo Credit : crewealex.net