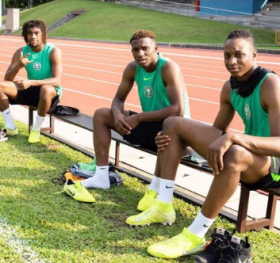 2019 Super Eagles invitee Viv Solomon-Otabor remains on the hunt for a new club following his departure from Wigan Athletic in the summer.
Allnigeriasoccer.com can exclusively report that the Birmingham City academy product was on the brink of joining Championship outfit Cardiff City this week but the deal has fallen through after the dismissal of Irish football tactician Mick McCarthy on Saturday.
The Bluebirds hierarchy took the decision to relieve McCarthy of his duties following a poor run of results that saw them lose eight consecutive matches and the final straw was the defeat at home to Middlesbrough.
Solomon-Otabor had been on trial at Cardiff City for the past two weeks and was told he was going to be signed on after impressing in training and a test game against Charlton Athletic in the Professional Development league.
McCarthy had opened talks about signing the Nigerian before his dismissal and Cardiff City now claim that they don't have the money to get the deal done.
The winger took only two minutes to open the scoring in the big win vs the Addicks U23s and provided an assist before subbing out at half-time.
And against Ipswich Town U23s on Tuesday, he bagged another assist and came close to scoring but his free-kick hit the woodwork.
Solomon-Otabor was named in Nigeria's matchday squad for a glamour friendly against Brazil in October 2019.
Ifeanyi Emmanuel
Copyright ANS
All rights reserved. This material, and other digital content on this website, may not be reproduced, published, rewritten or redistributed in whole or in part without prior express written permission from allnigeriasoccer.com