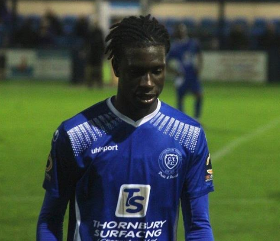 Allnigeriasoccer.com can exclusively report that a host of clubs are keeping tabs on versatile Chippenham Town striker Oluwasegun Lawal two months before the January transfer window opens for business.
The 19-year-old Oluwasegun Lawal is the elder brother of Bosun Lawal who switched to Glasgow Celtic from Watford in the summer.
Glasgow Rangers,  Liverpool, Newcastle United, Leicester City, Crystal Palace and Watfrod are monitoring the 6-foot attacking player.
It is believed that Leicester City, Crystal Palace and Watford are showing very strong interest in signing the Irish-Nigerian teenager.
Lawal put himself on the radar of the aforementioned clubs following a string of fine displays for Chippenham Town academy team this season, leading to a first team debut against Braintree Town on Saturday.
He is comfortable playing as a central attacking midfielder, winger and striker, and his preferred foot is right and can also play with his left.
Prior to Lawal's move to Chippenham Town, he wore the colours of Drogheda United in the Republic of Ireland.
Ifeanyi Emmanuel
Copyright ANS