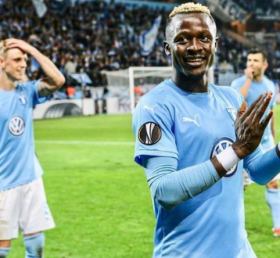 Super Eagles star Innocent Bonke could be leaving Swedish Allsvenskan side Malmo as a free agent in the coming weeks, according to reports.
Fotbolltransfers making reference to SportExpressen says the holding midfielder has rejected a contract proposal from Malmo as he was not satisfied with the terms.
It has been claimed that several foreign clubs are monitoring the situation of the 25-year-old ahead of a possible swoop.
Bonke has been on the books of Malmo for four years and is credited with 88 appearances for the club in all competitions.
The holding midfielder helped the Sky Blue qualify for the group stage of this season's UEFA Champions League, putting himself on the radar of the national team coaches, leading to a maiden call-up to the Super Eagles for the World Cup qualifiers against Liberia and Cape Verde.
A product of Moderate Stars, Bonke began his career in Europe with another Scandinavian club Lillestrom.
He was omitted from the latest Nigeria squad announced on Monday, November 1.
Igho Kingsley
Photo Credit : mff.se