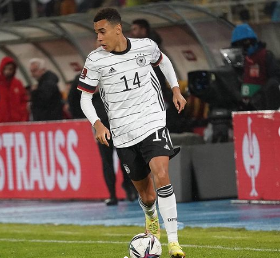 Super Eagles manager Gernot Rohr is disappointed that Nigeria missed out on Bayern Munich's former Chelsea schoolboy Jamal Musiala.
Born in Stuttgart to a German mother and Nigerian father, Musiala qualified to play for the Super Eagles through his dad but ultimately ended up committing his international future to Germany.
Of the three nations he was eligible to represent before becoming cap-tied to the four-time world champions, Nigeria were the only country he didn't make an appearance for at any level.
After leaving Chelsea just two years ago, Musiala became a talisman for Bayern Munich's youth teams and was quickly fast tracked into the first team.
The 18-year-old, a member of Germany's squad to the 2020 European Championship, has earned nine senior caps for Die Mannschaft, scoring one goal in his most recent match against North Macedonia.
Other players with Nigerian heritage who spent time at the Bayern academy before their first team breakthrough are David Alaba and Joshua Zirkzee.
Speaking on the success of the Bayern Munich academy, Rohr told Elegbete TV Sports : "They built a campus. I was there yesterday for the U19 match. 85 million euros, they made an investment for the young, for the future.

"Musiala is coming from here. Musiala I have the regret, he could also play for Nigeria but he decided to play for Germany. Wonderful player.

"They also have Alaba from this campus."
VfL Neckarau academy product Rohr was a teenager when he joined Bayern Munich, where he spent two years, before spells at Waldhof Mannheim, Kickers Offenbach and Bordeaux.
Ifeanyi Emmanuel
Photo Credit : dfb.de
Copyright ANS